Duties in accordance with Schemes

Every public body named under the Act has a duty to prepare a language scheme when requested to do so by the Minister for Culture, Heritage and Gaeltacht under section 11 of the Act.

The public body and the Department of Culture, Heritage and Gaeltacht jointly agree the provisions of the scheme and the Office of An Coimisinéir Teanga is not involved in this process.

When the Minister for Culture, Heritage and Gaeltacht confirms the scheme, the commitments under the scheme have statutory effect and the public body has a duty to implement them.

The purpose of the language schemes is to increase over a period of time the volume and standard of services available in Irish from public bodies. These language schemes remain in force for a three-year period or until a new scheme has been confirmed by the Minister.

The scheme describes the services which the public body proposes to provide:

It is necessary also to specify the steps which the public body intends to take to provide the stated services in Irish or bilingually.

The Office of An Coimisinéir Teanga monitors the provision of services as promised by public bodies under the agreed schemes.

Since the Act does not impose specific duties directly on public bodies with regard to the provision of telephone services, information leaflets, press releases and websites in Irish, the provision of these services depends on what is agreed in the relevant language scheme, if such a scheme exists.

Although all schemes share certain common elements, there are also substantial differences between them. Consequently, it is necessary to look at each scheme separately to see what services a particular public body provides in Irish, in addition to the services it is obliged to provide directly under the Act.

The Department of Culture, Heritage and Gaeltacht continues to agree language schemes with public bodies on an ongoing basis.

Schemes agreed to date can be viewed under Schemes Confirmed. 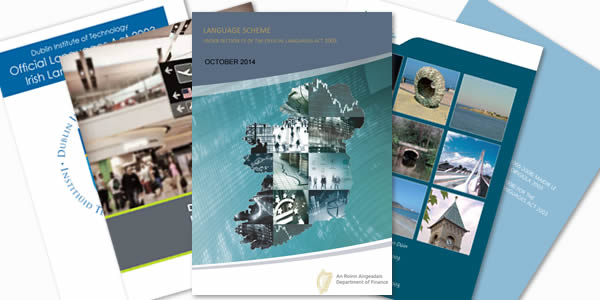