Irish used to be a compulsory requirement for employment in the public sector until this system came to an end in 1974. The government of the day decided that Irish and English would be put on an equal footing in the entrance examinations for the Civil Service i.e. that candidates would be able to use Irish or English, or both languages, in competitions and that recognition would be given to candidates who were competent in both languages.

In the years following that arrangement, the ability of the Civil Service to provide an effective service for those wishing to conduct their business through Irish decreased.

Towards the end of the 1970s, the Irish language movement, particularly Conradh na Gaeilge, began a campaign for a Language Rights Bill or a Language Act and the debate on the issue continued for more than twenty years.

In 1993 the government published guidelines prepared by Bord na Gaeilge (the state body for the Irish language) on the services through Irish which were to be provided by the public service. These guidelines had no statutory basis nor was there any effective monitoring system to ensure their implementation. As a result, very few state bodies operated in accordance with those guidelines.

In 2002 the government published the first draft of a bill aimed at providing more services of a higher quality through Irish in the public sector. The bill was debated and various amendments were made to it until it was passed unanimously by both the Dáil and the Seanad in summer 2003.

On 14 July 2003, the President signed the Official Languages Act 2003 into law and the provisions of the Act were gradually brought into force over a three year period. This was the first time the provision of services in general through Irish by the state system was placed on a statutory footing.

The aim of the Official Languages Act 2003 is to increase and improve in an organised manner over a period of time the quantity and quality of services provided for the public through Irish by public bodies. The legislation intends to create a space for the language in public affairs in Ireland.

The Office of An Coimisinéir Teanga was established under the Official Languages Act as an independent statutory office operating as an ombudsman service and as a compliance agency.

Rónán Ó Domhnaill was formally appointed by the President as Coimisinéir Teanga on 12 March 2014 on the advice of the Government following a resolution passed by both Houses of the Oireachtas recommending the appointment. The appointment for a 6 year period received the support of all the parties in the Dáil and Seanad. Seán Ó Cuirreáin was the first Coimisinéir Teanga from the establishment of the Office until his resignation on 23 February 2014.

It is the responsibility of the Office of An Coimisinéir Teanga to monitor the manner in which the State’s public bodies comply with the provisions of the Official Languages Act 2003. The Office takes all necessary measures to ensure that public bodies fulfil their obligations under the Act itself, under the Regulations made under the Act and under language schemes, where these apply.

The Office investigates complaints from the public in cases where it is believed that public bodies may have failed to fulfil their obligations under the Official Languages Act. The Office also enquires into any valid complaints regarding allegations that a provision of any other enactment relating to the status or use of Irish has been contravened.

The Office provides advice or assistance as appropriate to the public about their language rights and to public bodies about their language obligations under the Act. The primary objective of the Act is to ensure that the services provided through Irish by the Civil and Public Service increase in both quantity and quality over a period of time.

A detailed account of the work of the Office since its establishment in 2004 is provided in the annual reports available on this website. The Office’s financial statements are also available on the website.

On 14 July 2003 the President signed the Official Languages Act into law and three years later, on 14 July 2006, all provisions of the Act not already commenced by Ministerial Order came into effect. That meant that from this date onwards, every provision of the Act had a statutory basis.

On 1 October 2008, the Minister for Community, Rural and Gaeltacht Affairs signed the Official Languages Act 2003 (Section 9) Regulations 2008 (S.I. No. 391 of 2008). Under the Regulations, public bodies are obliged to ensure that their stationery, their signage and their recorded oral announcements are provided in Irish only, or in Irish and English, in accordance with certain provisions set out in the Regulations. No Regulations had been made by the end of 2016 regarding advertisements or live oral announcements.

An amendment was made to the Official Languages Act in section 62 of the Civil Law (Miscellaneous Provisions) Act 2011(http://www.oireachtas.ie/documents/bills28/acts/2011/a2311.pdf ).The amendment means that any Act of the Oireachtas may be published online in one official language before it is printed and published simultaneously in both official languages.

An amendment was also made in section 48 of the Environment (Miscellaneous Provisions) Act 2011 (http://www.oireachtas.ie/documents/bills28/acts/2011/a2011.pdf ) to a provision of Statutory Instrument (No. 872 of 2004) – Placenames Order (Gaeltacht Districts) 2004 – in so far as it relates to the placename, ‘An Daingean’. This amendment confirms that ‘Daingean Uí Chúis’ in Irish and ‘Dingle’ in English are now the official placenames where ‘An Daingean’ was used previously.

In April 2014 the Department of Arts, Heritage and the Gaeltacht published the Review of Official Languages Act 2003, part of which included the main provisions of the Official Languages (Amendment) Bill. It was announced, following further consideration of the proposed amalgamation of the Office of An Coimisinéir Teanga with the Office of the Ombudsman, and having regard to the results of the public consultation process which indicated strong support for maintaining the Office of An Coimisinéir Teanga as a fully independent entity, that the Government had decided not to proceed with the proposed amalgamation.

In February 2015, the Joint Oireachtas Committee on Environment, Culture and the Gaeltacht published a report containing 34 recommendations in relation to the General Scheme of the Official Languages (Amendment) Bill, 2014.

On 13 October 2016, the Committee on the Arts, the Irish Language, the Gaeltacht and the Islands decided to commence a new review of the proposed Bill.

Heads of a revised Bill were submitted to Government on 29 May 2017. Government approval was received to proceed with the drafting of the Bill, which is currently in train. 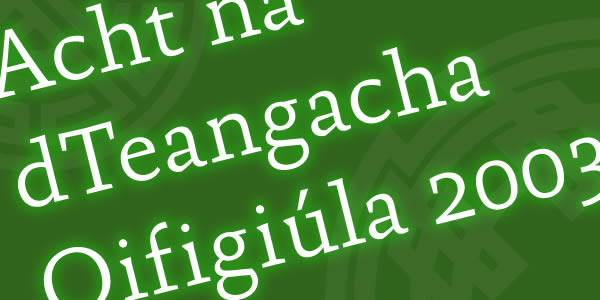